HBO is an American premium cable and satellite television network that is owned by Time Warner through its respective flagship company Home Box Office, Inc. The HBO television series Game of Thrones is an American fantasy drama television series created by David Benioff and D. B. Weiss. It is an adaptation of A Song of Ice and Fire, George R. R. Martin's series of fantasy novels, the first of which is A Game of Thrones. The series premiered on HBO in the United States on April 17, 2011, and its sixth season ended on June 26, 2016. The series was renewed for a seventh season, which premiered on July 16, 2017, and will conclude with its eighth season in 2018 or 2019.

Game of Thrones has attracted record viewership on HBO and has a broad, active, international fan base. It has been acclaimed by critics, particularly for its acting, complex characters, story, scope, and production values. The series has received 38 Primetime Emmy Awards, including Outstanding Drama Series in 2015 and 2016, more than any other primetime scripted television series.

WorldStage, the ultimate resource for event engineering, technology and imagination production was chosen as a partner for the Season 7 premiere party project due to their ability to surpass HBO and BARTKRESA studio’s extremely high technical and professional standards.

Demanding the very highest creative and technical standards from their vendors and partners, HBO (Home Box Office), WorldStage and BARTKRESA studio set out to create the ultimate premiere party for the global hit television series Game of Thrones. Projection on the buildings needed to be bright, arresting and highly color saturated: the projection technology was mission-critical to the success of the party.

After evaluating other technology providers, WorldStage and BARTKRESA studio selected Panasonic laser projectors based on their mutual need for the highest technical standards, quality, reliability and professionalism. Panasonic’s expert partnership throughout the entire specification and flawless deployment processes solved many production challenges of creating a world-class live event.

The speed to set up and configure these sophisticated projectors was extremely fast. The team was surprised and delighted to learn that they could project even when the sun was still up! The ultimate premiere party for the global hit television series Game of Thrones was a smashing success.

You really have to be at the top of your game to work in Hollywood with giants such as HBO, Walt Disney and the "Game of Thrones" team. We’re going to continue to use Panasonic projectors because the superior technology allows us to fulfill our mission of crafting unparalleled projection experiences around the globe through light, story, and design.
Bart Kresa, BARTKRESA studio

"I loved working with WorldStage," said Bart Kresa of BARTKRESA studio. "I’ve known them for many years and was thrilled to be working with them on this project. We had very little time to get this set up and WorldStage was able to get this put together for us very quickly. They had worked out all the details beforehand and came in with everything prepared and tested. They were really on top of their game and it was a pleasure working with them again. We also could not have done this without the trust that HBO gave us. We had to really manipulate and reimagine some of the images to make them work with the shape of the hall and HBO was great about it. I think that this was due to our long working relationship together." Master Projection Designer, Bart Kresa, brings over 20 years of industry experience. His BARTKRESA studio has won event and themed entertainment awards, including AV magazine, Biz Bash, IAAPA, and the Themed Entertainment Association. Bart’s primary mission is to craft unparalleled projection experiences around the globe through light, story, and design. BKS’s clients include: Universal Studios, Disney, ABC, HBO, Fox, General Motors, Warner Bros, The Grammy Awards, Playboy, Bulgari, and T-Mobile. The "Game of Thrones" Season 7 premiere party was held on July 12th at Frank Gehry designed Walt Disney Concert Hall the night before the Emmy Award nominations were to be announced. The transformed venue included a parking structure that gave a scenic overlook of both the Los Angeles skyline and the concert hall itself, which had "Game of Thrones" themed projections by projection designer Bart Kresa painting the classic curves of Frank Geary’s architecture.

The evening began with a flying dragon engulfing the façade in flames. The faces of the Night King and the show’s stars wandering on an icy tundra followed. Blooms from the Weirwood Tree billowed across the façade, thawing the ice. These rotating looks transformed the distinct façade into an otherworldly backdrop.

The after-party, staged on the roof level of Classic Parking across the street, overlooked the hall where Kresa mapped the upper planes of the building with stunning scenes and imagery from HBO’s hit series. WorldStage provided Kresa with Panasonic laser projectors and video engineering support for the eye-catching imagery. 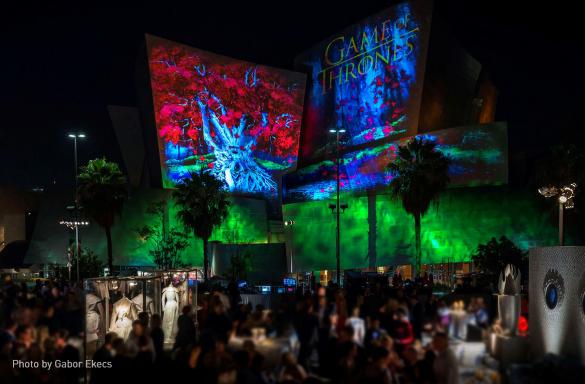 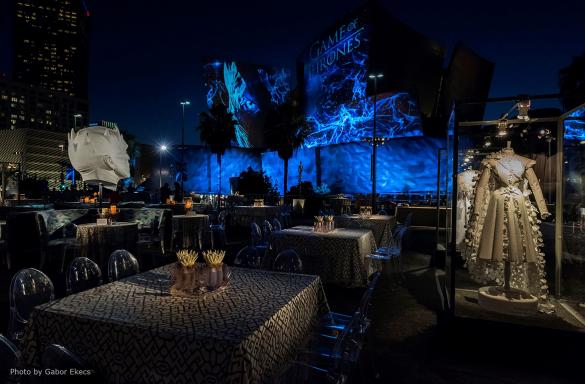 As The Los Angeles Times (July 13th 8:20 AM) put it, "Really, it’s a power move to throw a rager of a party the night before everyone else in the industry is honored (or overlooked) at The Emmys by their peers."

Kresa did some initial tests on the building pointing small projectors and even flashlights at the façades to study the surfaces and ensure that the direction of the reflections would be seen by the audience. He was interested in using the new Panasonic PT-RZ31KU laser phosphor projectors, which WorldStage demoed at an open house last spring.

"Bart knew the kind of firepower he needed for the concert hall and was inclined to use the Panasonic laser phosphor projectors whose light source has a broader color gamut and greater color brightness than conventional lamp source projectors," said Bob Loney, WorldStage Senior Account Executive. "The Panasonic laser phosphor projectors also offer 20,000 hours of use and have a flatter decreasing light output ramp." "We did some side-by-side tests between the Panasonic and other projectors and found the PT-RZ31KU to be far superior for what we wanted," said Kresa. "The color saturation was amazing and the images were literally glowing, exactly what we needed for this project."

WorldStage partnered with Panasonic to provide the Panasonic PT-RZ31KU projectors that Kresa required along with additional projection and engineering support. The WorldStage team worked with Kresa to install the equipment the night before and tech through everything.

"The large curved surfaces of the Walt Disney Concert Hall are covered with stainless steel tiles," Loney notes. "Initially, we were concerned the façade would have too much of a mirror finish for projection. But it turned out that the surface reflectivity gain was exceedingly friendly: The surfaces were not too reflective. The surface gain really added to the brightness."

In fact, front projection on a façade typically cannot be seen until sunset or shortly thereafter.

"But we saw pictures on the concert hall at 6pm with a blue sky behind the building due to the remarkable amount of light from the double-stacked Panasonic projectors and some elevated gain that focused the image toward the viewing area," said Loney.

Kresa did the pre-vis for the projection mapping and managed his content with Dataton WATCHOUT media servers. WorldStage did the projector set up and alignment the day before the event. The company supplied portable instant canopies and plastic sheeting to protect gear overnight and space blankets to keep electronics out of direct sunlight during the day.

"The projection mapping came off even better than we expected," said Loney. "The client was over the moon. And there were reports that fans on the street found the imagery just jaw-dropping. They’d never seen anything like it."

"It came out beautifully and I’m really happy with everything about this project," said Kresa.