Redemption Church Gets Energized By Panasonic 4K Cameras and Projectors

This year, Pastor Carpenter and his staff have begun to realize that vision with a total upgrade of the church's audiovisual capabilities, installing five Panasonic AK-HC3000 4K/HD camera systems and two PT-RQ32K 27,000 lumen 4K+ laser projectors to become one of the first fully 4K churches.

Throughout his 26 years as leader of Redemption Church (Greenville, SC), Pastor Ron Carpenter had noticed that his congregations were consistently one-generational, skewing older. Concerned with the spiritual lives of his congregants' children and grandchildren, he became determined to completely transform the Redemption worship experience to one with cross-over appeal for millennials (18 to 29 years old) and younger.

Pastor Carpenter and his staff have begun to realize that vision with a total upgrade of the church's audiovisual capabilities, installing five Panasonic AK-UC3000 4K/HD camera systems and two PT-RQ32K 27,000 lumen 4K+ laser projectors to become one of the first fully 4K churches.

Pastor Carpenter reports that during the first three months of these new, immersive worship experiences, more than three-quarters of all new members have been identified as millennials or younger. In addition, its Facebook Live broadcasts had eclipsed traditional television broadcasts in viewership - ”a huge game changer” for the church.

The first two quarters of this year, 76% of our new constituency were millennials. Four to five years ago that would not have even been close, probably less than 15%. A lot of the investment we have made to be tech savvy, we are just now beginning to see the real fruit, the real return on our investment.”
Ron Carpenter, Pastor

Redemption Church is a multi-site mega-church founded in 1991 by Pastors Hope and Ron Carpenter, with its hub church in Greenville, South Carolina, and satellite campuses in Columbia, SC; Florence, SC; Charlotte, NC; Asheville, NC; Raleigh, NC; and Puerto Plata, Dominican Republic; as well as members of its i.Church online community, located throughout the world, who meet during live services from Pastor Ron Carpenter.

Redemption Greenville, in a modern facility sitting on 20 acres, conducts 9 a.m. and 11 a.m. Sunday worship services that are broadcast live to all the satellite churches, as well via Facebook Live and the church's web site. The number of congregants in physical attendance ranges from 5,000 to 11,000 weekly, with the worldwide Redemption community numbering close to 30,000.

The church estimates it reaches 300,000 to 400,000 people every week through its different media outlets.

Joe Hayes, Media Director for Redemption Church, has long been affiliated with the church, where for the past 10 years he managed a 720p infrastructure driven by Panasonic AG-HPX500 P2 HD camcorders. “The HPX500s had served us well but they were aging, and we wanted to upgrade to 1080p,” Hayes said. “But 4K was staring us in the face. Future-proofing acquisition was very important—we didn't want to have to switch up cameras in three years.”

Hayes found his camera solution in the UC3000, which features native 4K acquisition with simultaneous UHD/HD output. “With the UC3000s, we have developed two concurrent technology platforms, one sending 1080p to the TV side of our operations, the second outputting 4K through our 4K production switcher to the RQ32Ks, which feeds two 21' W by 12'H IMAG screens on either side of the sanctuary stage. Center stage are 300 LED panels that are fed a variety of custom content from two Green Hippo Karst media servers.” 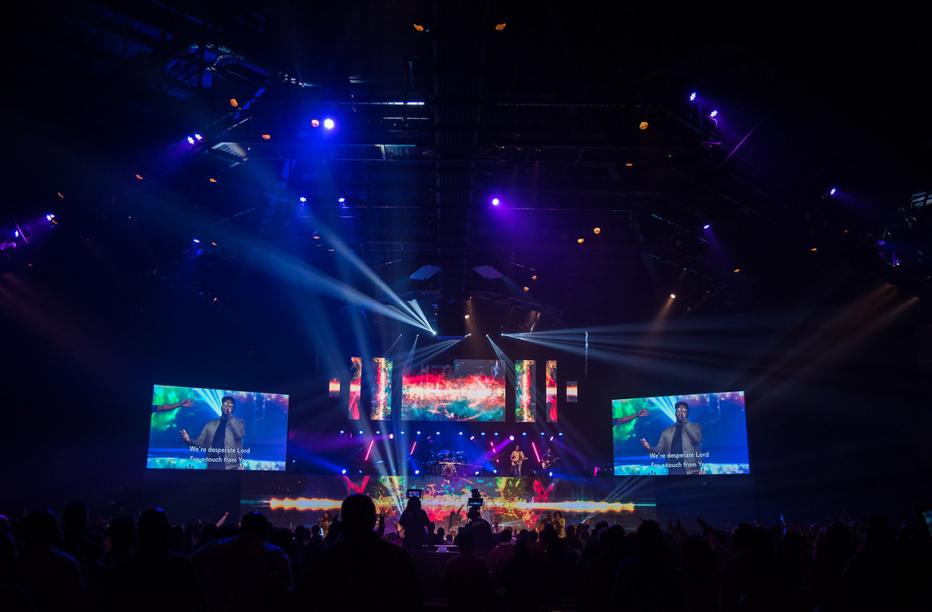 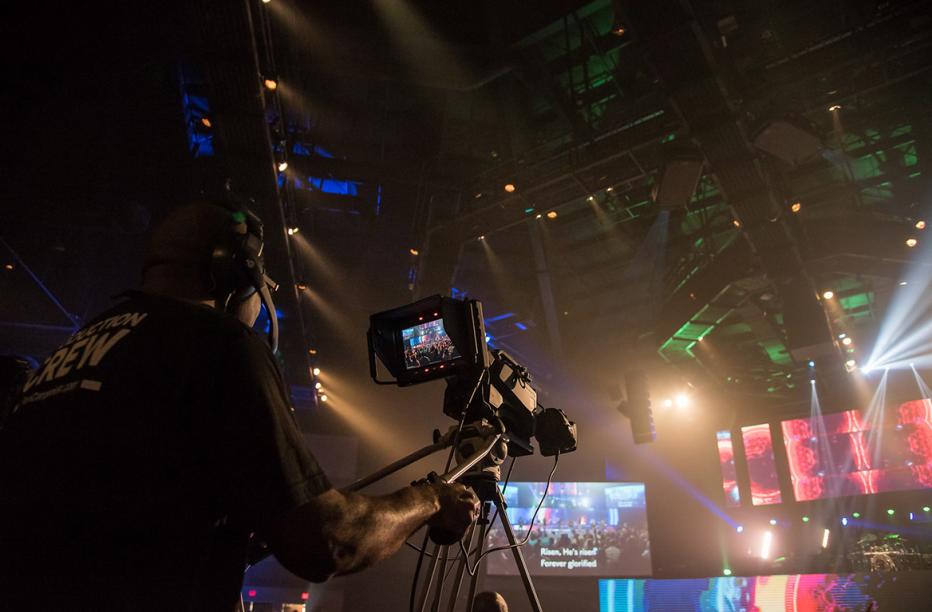 Systems integrator AE Global Media, with a team lead by company CEO Donnie Haulk, designed and built the infrastructure and A/V systems for Redemption Church. “Creating an intimate worship environment in a large space and having it translate accurately across broadcast and social media video formats was the biggest challenge,” Haulk noted. “The visual intimacy that we were able to achieve with the Panasonic laser projectors helped us achieve the desired goal. Pastor Ron is a very expressive communicator and his expressions as well as body language are key factors in his delivery of Pastoral Ministry.”

Redemption is the only church in America worshiping the way they are with combinations of resolutions: 4K for their live worship experience, then having HD broadcasting with social media, broadcasting over the major networks and the internet. It is the only one doing what it’s doing.
Donnie Haulk, CEO, AE Global Media

Hayes said Redemption continues to send a 720p signal out of the building to its satellite churches, Spanish feed and Facebook Live, but plans to upgrade to 4K as soon as feasible. The church's services are seen on several television networks—worldwide Christian broadcasters including Trinity Broadcasting Network, Hillsong Channel and Daystar--and that content is distributed in 1080p. The Panasonic AV-HS6000 2ME production switcher is utilized for the TV broadcast.

In terms of placement of the UC3000s, two are used on tripods in the sanctuary as the main cameras, two are used handheld, and one is used on a 30' jib stage left. The church continues to use one HPX500 on a 30' jib in the crow's nest (and upconverts to 1080p) and one AG-HPX170 1080p handheld P2 camcorder on a Steadicam.

“The RQ32K projectors deliver a night and day experience versus our previous 10-year-old projector technology,” Hayes noted. “On a good day, the projected video used to look like dubbed VHS tapes. The 4K projection is blowing our audiences away. We can see skin tones, details we hadn't even known were there.”

“Our old technology had painted a poor representation of our mission, but the combination of the UC3000 cameras and RQ32K projectors now afford our congregation a true life, full color 4K experience,” he added. “Our congregants are more fully engaged in a bright, vibrant, uplifting worship experience.”

Targeted at studios and productions requiring high-end functionality at an affordable price, the UC3000 (with the AK-UCU500 CCU unit) outputs a UHD signal (3840 x 2160 at 59.94p, 50p, 29.97p, 29.97PsF, 25p, 25PsF, 23.98p, 23.98PsF), while also delivering superb picture quality in HD. High dynamic range (HDR) is also possible for either HD or UHD images and there are no additional licensing fee requirements for UHD or HDR. The camera’s B4 mount accommodates the gamut of existing 2/3-inch lenses to maximize customers’ return on their investment in existing lenses, and allows a wider and more economical choice of glass for sports, concerts and similar applications.

*1 Measured at center of screen

Panasonic Connect has long collaborated with TEDxCambridge in support of it...

How to improve collaboration and communication in remote and hybrid work se...

Collaboration and communication are key to business success. However, the c...