Displayport and HDMI are two distinct standards for transmitting audio and video from a player to a Display. What are the differences between the two?

You’ll also find an HDMI port in most consumer desktop and laptop computers. No modern all-in-one is complete without an HDMI input that allows you to connect a gaming console or a set-top box to the computer so you can use its display for a second purpose.

But given HDMI’s ubiquity, you might have forgotten the other digital audio/video standard: DisplayPort. Though you’ll find it alongside HDMI in many late-model, add-in video cards, as well as in laptops marketed to business users, it rarely appears in Windows PCs aimed at consumers.

Both HDMI and DisplayPort can send high-definition digital video and audio from a source device to a display. So what’s the difference? We’ll answer that question, starting with a review of how the two standards came to be, and what entities control them.

The DisplayPort specification was developed by, and remains under the control of, the Video Electronics Standards Association (VESA), a large consortium of manufacturers ranging from AMD to ZIPS Corporation. DisplayPort debuted in 2006 as part of an effort to supplant the much older VGA (Video Graphics Array, an analog interface first introduced in 1987) and DVI (Digital Video Interface, introduced in 1999) standards used primarily for computer displays. DisplayPort is a royalty-free product.

Fun fact: Of the six companies responsible for the creation of HDMI, only Hitachi and Philips are not also member companies of VESA.

HDMI connectors have 19 pins and are most commonly seen in three sizes: Type A (standard), Type C (mini), and Type D (micro). Of these, Type A is by far the most common.

A fourth category of HDMI connector, Type E, is used for automotive applications. Most HDMI connectors use a friction lock, meaning that a tight fit keeps the plug mated to the socket, but some vendors have developed proprietary locking mechanisms designed to prevent the cable from pulling loose.

The three types of HDMI connectors you’re most likely to encounter are (from left to right) standard, mini, and micro. A fourth connector type, for automotive applications, is not shown here.

DisplayPort connectors have 20 pins and are available in two sizes: DisplayPort and Mini DisplayPort (the latter is the port of choice for Microsoft’s Surface Pro tablet). Interestingly, Intel’s Thunderbolt interface combines the features of Mini DisplayPort and adds PCI Express data connections – but that’s beyond the scope of this article.

Though most full-size DisplayPort connectors have a locking mechanism that prevents them from being disconnected accidentally, the official spec does not require that feature.

You’ll find HDMI Type D micro connectors on some smartphones and tablets, but no manufacturer aside from Microsoft puts even Mini DisplayPort on its handheld devices. The locking connector common to full-size DisplayPort connectors, on the other hand, is a great feature that appears on only a few HDMI Type A cables.

The biggest problem with HDMI cable standards is that there are four of them currently, with a fifth standard on the way to accommodate the recently released HDMI 2.1 spec. Many, many older cables are not adequately labeled to identify their capabilities. Using an HDMI cable that isn’t up to a particular task can yield problems including visual and audio glitches, artifacts, and audio/video synchronization problems. Here are details on the four current types of HDMI cables. 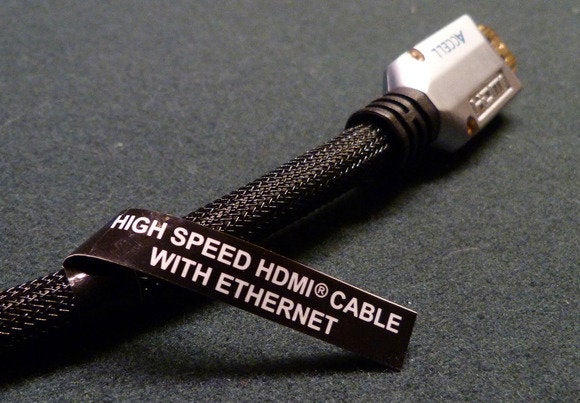 All four types of HDMI cables have a feature called the Audio Return Channel (ARC) that can send the audio from the TV tuner in your HDTV back to your AV receiver. Prior to ARC’s introduction, you needed to connect a second, audio-only cable between your TV and your A/V receiver to play sound from the TV tuner. (Note: ARC is unnecessary if you subscribe to cable or satellite TV and use a set-top box.)

The HDMI specification doesn’t define a maximum cable length, nor does it state what type of material HDMI cables should be composed of. Copper wire is the most common material, but HDMI signals can also be run over CAT 5 or CAT 6 cable (for distances of up to 164 feet), over coaxial cable (for up to 300 feet), or over fiber (for more than 328 feet), according to HDMI Licensing LLC.

“Active” HDMI cables have integrated circuits embedded in the cable to amplify the signal. Active cables can be longer and thinner than passive cables (thinner cables are less likely to fail when forced to make hard bends).

DisplayPort cables are much simpler to define: There’s just one type! The current version, DisplayPort 1.3, delivers enough bandwidth to carry video resolutions of up to 3840x2160 pixels at a refresh rate of 60Hz, and it supports all common 3D video formats. DisplayPort cables can also carry multichannel digital audio. On the other hand, DisplayPort can’t carry ethernet data, and the standard doesn’t have an audio return channel.

The two types of DisplayPort connectors are Standard and Mini.

A passive copper DisplayPort cable can support extremely high data rates (a video resolution of up to 3840x2160) over a length of 6.5 feet. If you want to run a passive copper DisplayPort cable as long as 50 feet, the standard says you’ll be limited to 1080p resolution – but the spec is conservative, and in practice that 50-foot cable can carry enough data to support resolutions as high as 2560x1600 (sufficient for a 30-inch display).

HDMI can handle a single video stream and a single audio stream, so it can drive only one display at a time. That’s fine if you use a single monitor or a TV, but many people use more than one display these days. These use cases aren’t limited to stockbrokers keeping one eye on a ticker and the other on news headlines, either. Many gamers use two or more monitors simultaneously. And once you become accustomed to having multiple screens on your desk, you won’t want to go back.

A single DisplayPort interface can support up to four monitors at 1920x1200-pixel resolution each, or two monitors at 2560x1600-pixel resolution, with each display receiving independent audio and video streams. And since some GPUs can support multiple DisplayPort interfaces, you can daisy-chain compatible monitors to connect as many as six displays to one source.

Which display interface is best?

HDMI was designed primarily for consumer-electronics applications: Blu-ray players, TVs, video projectors, and the like. Despite the confusing cable specifications, it does things that DisplayPort can’t. Meanwhile, VESA designed DisplayPort to be the ultimate display interface for computers, so it complements rather than replaces HDMI.

Unfortunately, many computer manufacturers – especially those building consumer laptops and all-in-ones – seem to have decided that HDMI is enough. Here’s hoping that this attitude changes, because DisplayPort offers at least as much to consumers as it does to business users.

HDMI isn’t going anywhere, and we wouldn’t want it to, but it’s time for computer manufacturers to show DisplayPort some love, too.

In the meantime, here’s what you should look for the next time you shop for an HDTV, computer, or monitor:

As we said at the outset, HDMI is ubiquitous. It will appear in just about any TV you might consider buying, and it will be included in every consumer-oriented computer display. It should also be present in most video cards, in laptop and desktop PCs, and (as an input, at least) in every all-in-one PC.

If you plan to use a laptop with a stand-alone display, you won’t regret paying a little more to get a model that offers DisplayPort: Its support for multiple displays and its ability to connect to nearly any other type of monitor with an inexpensive adapter give it greater flexibility than HDMI possesses.

Editor’s note: If you enjoyed this article, you might also be interested in reading this story about DisplayPort’s new multi-streaming feature.

This article was written by Michael Brown from PC World and was legally licensed through the NewsCred publisher network. Please direct all licensing questions to legal@newscred.com.

Immersive tech gets sports fans into their favorite game … literally