Located in northwestern Iowa, the Sioux City Symphony Orchestra (SCSO) is one of the nation’s oldest at 105 years old and is highly distinguished for its innovative, multimedia performances. With 70 members, the orchestra is a true regional ensemble that draws its members not only from Iowa but also from nearby Nebraska, South Dakota, and Minnesota.

In Sioux City, in-person audiences of classical music performances halted from mid-March 2020 to March 2021 as the pandemic prevented the orchestra from gathering and hosting its planned season, which typically consists of eight to 10 programs each year.

“We were in the middle of the storm as Covid-19 completely shut down our 2020 season, but we knew we needed to be here when the pandemic abated, so we immediately started preparing for our return,“ said Ryan Haskins, music director, SCSO. “If you go back through any disastrous moment in history, it has always been the arts which eventually take humanity back to where they feel normal again.”

Under Haskins’ leadership, the SCSO studied solutions and consulted with other orchestras on how to best provide a concert experience even when an audience was not able to gather. The orchestra’s goal was to establish a multi-camera set up to produce live and pre-recorded musical performances to showcase themselves online.

In addition, the orchestra’s new live streaming and on-demand platform had to take into account the need for a speedy set up and have the flexibility to be expanded easily. Live performances are held at the 2400-seat Orpheum Theatre in downtown Sioux City. The theatre is a multi-use facility hosting many other events, from touring Broadway shows to comedy acts. The SCSO receives access to the theatre only one week before a performance, so the new equipment had to be mobile for efficient loaded in and out and offer a small footprint to be easy to store off-site.

The SCSO recorded the first concert performance with its new Panasonic Live Streaming system in December -- a two-hour, internally-produced Holiday TV special for the local NBC station that received tremendous positive responses from the community. In January, it produced six 30 - 45-minute digital chamber music concerts, including a three-part series on Beethoven, which were all offered exclusively on its new SCSO LIVE streaming service. “Without our new Panasonic gear, we would not have been able to present this incredibly diverse, impactful programming to the communities that we serve,” said Haskins.

In March and April, the SCSO resumed in-person concert presentations with limited audiences and safety precautions in place, live streaming them and making them available on its SCSO LIVE on-demand app.

To capture the live performances, the SCSO mounted two UE150s (house right and left) on a light rail on the balcony, placed the EVA1 camcorder farther up in the mezzanine to capture a wide shot of the entire stage, and placed the third UE150 on stage for close-ups of the musicians. The four cameras are controlled by the RP150 and switched by the UHS500. The video village is remotely located in the theatre’s basement, removed from the house, which helps in terms of communication between operators and is closer to the theatre’s network to aid the live stream.

For the live performances, a three-member production team led by Adam Gonshorowski, the orchestra’s live producer and director of digital content, downconverts the 4K video signal to 1080 HD for the live stream. The production team, along with Haskins, then edit the performance and upload a 4K 60p program to Vimeo for patrons and subscribers to SCSO LIVE. “You can watch the performance live on a Saturday night, fully mixed and produced, and then you can go back after the fact to watch it in 4K on Vimeo as well,” said Gonshorowski.  “The UE150’s 4K 60p image is fantastic, especially the detailed close-ups of the musicians and instruments.  Going from a brightly lit stage to the darkness of the audience is a huge challenge for a camera, and the UE150s handle all the different lighting challenges very well.” 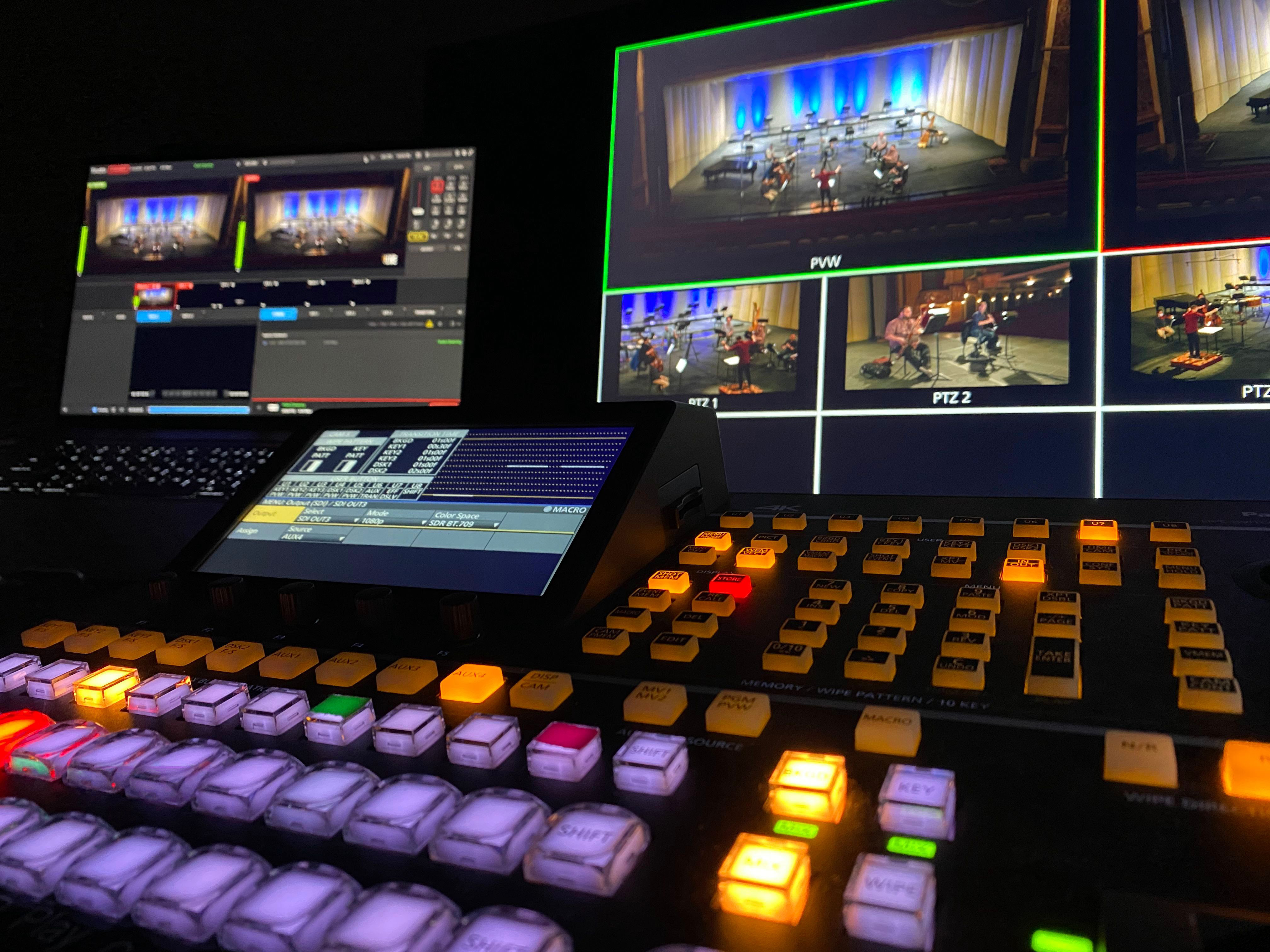 According to Gonshorowski, the UE150’s small footprint, quiet operation, ability to be remotely controlled, and easy setup and cabling thanks to POE++ were huge pluses, as the SCSO didn’t want to have camera operators in house. “It’s a better experience for the audience not having to watch the operator pan a camera or overhear the operator on a headset. We can deploy the PTZ cameras in more interesting locations where a person cannot get to. This allows for more creative options with the cameras because we don’t have to have a person standing behind them.”

“It has been awesome that there’s only three of us that are needed to run the system. It’s a very adaptable system for whatever the performance requirements. I don’t think we could be doing what we are doing with a different system,” said Gonshorowski.

The SCSO realized investing in Panasonic 4K professional video equipment would allow them to deliver higher-resolution programming to its patrons. “Producing in 4K 60p and sending it out to the internet is a very big deal for an organization of our size. Our whole team has been energized to record in 4K,” said Gonshorowski.

According to Haskins, a virtual performance will not replace the magic of a live performance. But if a person cannot physically be at the venue, a virtual experience is the next best thing. “If you watch from your seat in the theatre, you basically have one view,” said Haskins. “Because of our new Panasonic cameras, patrons can view the concert from many unique perspectives. It allows for a virtual on-stage experience - close-ups of the instruments or even musicians playing solos. Patrons can now experience angles that they cannot normally view from their seats.  And then, of course, it also gives an audience member the chance to go home and rewatch some of their favorite moments of the evening after they have attended in person.  It’s a new, refreshing way to view our programming.”

The new PTZ cameras/switcher system has also allowed the orchestra to greatly expand its outreach educational efforts.  “A large part of our mission is music education and community outreach to young people. We can now connect with classrooms, not just in Sioux City but across the country or around the world. The possibilities are endless. This is exactly what the orchestra world needs. Orchestras have been criticized for only reaching their base audience, but it’s now thrilling to think how we can evolve with this new technology.”

Having levelled up with Panasonic’s 4K PTZ cameras/switcher system, the SCSO is able to efficiently and creatively live stream its programming and is looking to produce more TV programming as well as more exclusive offerings for its SCSO LIVE app and digital library. Its live streaming efforts are off to a great start, as the SCSO has created a future-proof 4K 60p video system that is easily expandable by adding cameras to provide new angles and perspectives to educate and entertain patrons.

Our PTZ cameras/switcher system “will allow us to expand into new uncharted waters that will provide us with an energy and creative fuel that you cannot match,” Haskins added. “It gives us the opportunity to share with more people the chance to experience the art we know and love.”